"We are boring people to death" – I believe is the exact quote from non other than Electronic Arts CEO. He was referring to the endless sequels to established games, which bring little more than shinier graphics and few more features.

He has a point! Gaming companies need to get the ball rolling on more innovate gameplay! Still, as technology matures, there is always time to revisit the tried and true formula of Wolfenstein’s 3D first person shooter genre. Just few recent games come to mind that raise the bar across the board and really take this style to the next level. They bring us amazing improvements in graphic visuals, realistic sound, and most importantly very real physics. Two such games come to mind for this holiday season, and the most technologically advanced one is Crysis.

Just watch this short 30 second trailer. Make sure to watch it full screen to see high quality of real in-game visuals. Of course you will need DirectX 10 Windows Vista PC, with decent nVidia GeForce 8000 series graphics card. But, I hear it should run on lesser PCs also, just not with such shiny graphics. 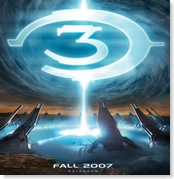 Another holiday favorite this season is Halo 3 for XBox 360. This game has come of age, and is probably the most feature complete first-person shooter today.

After playing Wolfstein, many years ago, then later some Doom 2 — it’s really becomes more of the same. I am also not a fan of doing first person shooters using joystick. Really, this is exactly what the mouse was created for, to aim with and shoot, while running sideways or jumping, using the keyboard, of course.

Remember, both games are rated M for Mature! And I really think they aren’t kid or even teen material.

For your family, check out Playground, an up and coming fun title from EA. Looks like they are finally trying to avoid boring people to death, though, this one is just a fresh Wii style take on the classic Party games genre 😉

In my opinion Gaming with your Family is the new spending time with kids. This is what they are into today, and joining in their activities, and showing them "how it’s done" is something that Parents must strive for, to maintain that all important link with your kids and have their ongoing trust of being Authority on All things Life.