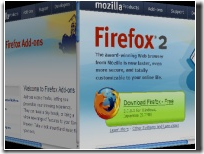 I tried out Opera 9.50 Alpha today, and while it may be as lightening fast as they claim, that doesn’t help me any. If it can’t render Google Reader properly, which is critical web app for me, it’s no good… I realize it is Alpha, so I will just let them work on these kinks for now.

So, back to excellent Firefox for me. If you haven’t tried Firefox yet, drop everything and go download it right away. You may not be seeing my blog properly if you are in Internet Explorer 6 or earlier. And, since Firefox is totally Open Source and free, what is stopping you? It does not remove Internet Explorer, so you can always go back or use both side by side.

What makes Firefox especially great is the extensive and ever increasing library of addons. I use a lot of them, too many to list here in a short post, but here is one Fun one for you to try. It makes your Firefox Tabs act 3D, seriously! Called Tab Effect, it makes switching tabs in Firefox a visual feast.

Another great feature in Firefox is a setting to Restore your Tabs when you start Firefox. So, if you just want to turn off PC, when you turn it back on tomorrow and launch Firefox, all your Tabs will get restored and be on the same sites as you left it.

Hi,
I have two comments today. Both regarding your favorite FireFox.
First, the feature of showing sevaral tabs on startup exist in the IE7 and called something like homepage.
Second, some time ago our another geek told our relative here in Gwinnett to install the FireFox. Eventually the FF bacame the default browser after the install. Guess what? My wife will not let me lie – since then I am getting calls from this not computer savvy relative twice a week with various problems like page can not open,

flash movie does not play showing black rectangle instead while installing latest version from adobe does not fix the problem. I am able to fix all his problems without installing FF on my computer by just telling him to open the same page in IE.

BTW, can you let us write more characters here in one posting ? And let us correct them as I see misspellings and typos only afterwards.

Firefox is probably more aggressive with how fast a web site should respond that it exists. On slow dial-up or bad broadband, I can see it being a problem. It can also be specific issue with DNS server, in which case I would recommend to manually set DNS server to 4.2.2.2 and 4.2.2.1 (probably in Router).
About Firefox becoming default, it asks you either during install or on first launch. You need to tell it No and Don’t Ask Again. After that, it remembers this setting for all future updates.
Finally, if all else fails, offer the certain “person” to Uninstall Firefox, this should bring IE as a working default.
About IE opening multiple tabs — that’s completely different. In IE7 (ONLY!) you have a feature of having multiple web sites as your home page, and they will all open when you start browser. I was talking about Resume Browsing feature, in which it remembers which tabs/sites you were on when you turned Off Firefox, and brings them back.
Oh, and there is plenty of space in comments, as you can see! Are you planning your dirty tricks again, Ilia?!?