This is an early report on the new Zune software, since it just came out this Tuesday (two days ago). It is a major overhaul of Zune Firmware as promised, but the Desktop software redesign seems less dramatic.

But, there is a Bug that exceeded my wildest expectation — my cherished Music Library is all messed up now! Seriously, there are some glitches people forgive, but probably not this one. Some artists and their albums are correct, yet others are all mixed up. Wrong Album Art appearing on albums, AND wrong songs appearing inside the albums (just some songs, from other albums, get mixed in with real album songs)!!! 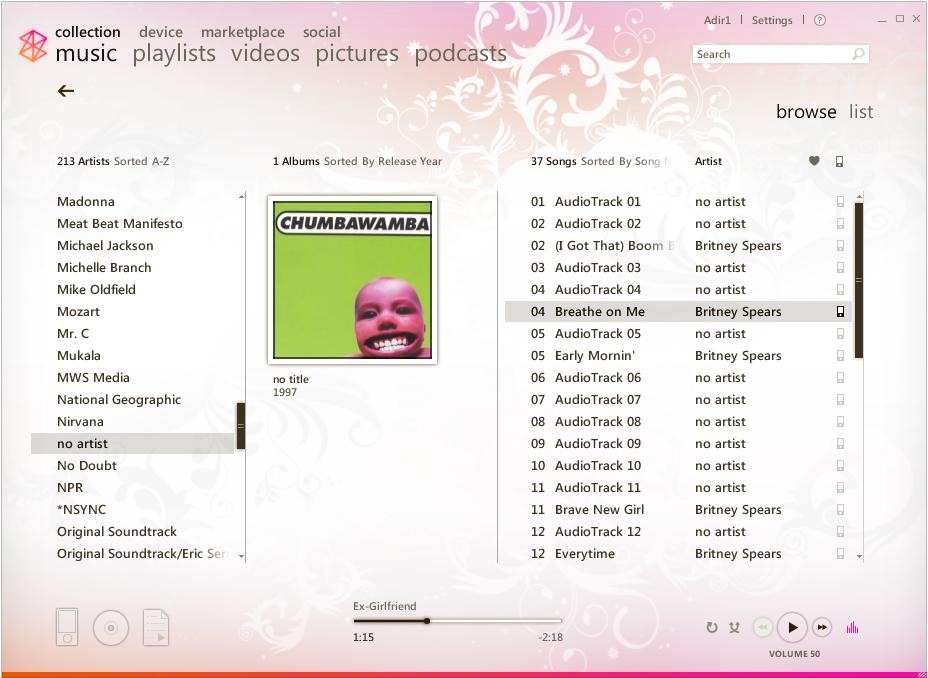 Britney Spears should be most upset, however. It put some of her songs under No Artist category, and slapped Chumbawamba Album Art on them! It really has no excuse for messing up so badly! These Britney’s song are from my personal CD collection, and were ripped using Microsoft’s own Windows Media Player not too long ago! The songs located in proper folder and contain proper MP3 tag information embedded in them (check out the screen shot below).

But maybe, the new Zune software using some sort of advanced Artificial Intelligence to figure out the actual level of artistry behind some specific songs?! Maybe by analyzing the MP3 song itself (finally putting my powerful Quad Core PC to some fine use)?

UPDATE: Bugs happen! So after posting this and finishing other daily activities, I set out to find a fix. And looks like Microsoft posted it on the day of software release, at 4:55pm on their Zune forums, just scroll down to post by Zmanaaa. I promptly followed their simple instructions and looks like it fixed all of my troubles! The only remaining issue is occasional Album Art confusion. However, I found how to fix that also! Simply navigate to relevant Album directory where the Art is wrong, and Delete album art file, called ZuneAlbumArt.jpg (May be Hidden, so make sure to select Show Hidden Files in Explorer options). Then, Zune promptly redownloads proper Art from it’s Online database, whenever you navigate to that album in Zune desktop software. Voila!

UPDATE2: After doing the database recovery fix above, you will need to Resubscribe to all your podcasts, even though most will appear in the list still. Another thing I had happen, only once though, when unplugging Zune from my Sleeping Vista machine, it didn’t “reactivate”. I had to switch the Key Lock On/Off, before it started responding to any key presses.

UPDATE3: Since at first I didn’t realize I had a problem with my music library, I naturally synched all the mess to Zune. Turns out even after you fix the library, Zune can still have mess “stored” within it. So, I fixed that also yesterday. To fix it, you will need to blow away everything from Zune and “reset” it essentially. Navigate to Settings in the upper right of Zune software, click on Device in the settings, and find Erase All button. Once done, disconnect and reconnect your Zune, and it will re-sync everything down to device (may take a while, but it’s worth it).

UPDATE 12.5 (Nov, 2008): WOW, This post is still as popular as ever, a full YEAR after it was posted. There was another update to Zune software since this post, and mostly everything is so much better now. These workarounds will still likely work for you, though I did not need to try them myself since then. I am still having some issues with Podcasts duplicating, but that is really minor, seriously!

I also found that after installing and launching Zune it interferes with my Adobe Illustrator CS3 software. took me a while to find out what was going on…files can’t save (get error message), things display incorrectly, etc. if i reboot everything’s fine until i launch Zune player again. What gives?

Interesting! Are you running on Vista or XP?
My early guess is that somehow the fancy 3D features of Zune interface causing your troubles. Maybe try to update your PCs Windows Display Driver, but this is just a guess, of course.

Ive had my 8 gb for a while now and I was all pumped up to get the new 3.0 software.. now every night when I go to reconnect it to my computer the computer to reconize it. It says Uknown USB connected so I have to erase my Zune and Reload the software.

This is a rather old post, but your trouble sounds pretty bad, I recommend you call Zune support, they have a free support line.
Anyhow, I am working on new Post about Zune 3 software and comparisons with iTunes 8 software, which I also use now (with my iPhone).

Hello Adi, how do you do.
I’ve just landed a day ago from chernvtsi
it was fun there, the prices there very a little cheaper like in 5 to 10 percent and the dolar was sky high which was good to us we bought dolar in isreal at about 3.5# shekel and seald dolar at about 5.4# grevini(ukreain money) in chernvtsi. this way we almost eraend 50% percent discount the dvd’s there cost almost like in israel but with the doller diffrence it was cheaper to us.
every day we were in a another place from morning to evening we ate outside in resturants avry day becuse we were on the go and the hotel gave only breakfest but that was ok.
thank you for the attention and ByeBye Yaniv R.
PS: it was dad idea to write to the site.