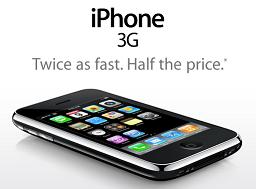 I am calling upon you, my readers, family, friends, everyone, Save Me from this madness that is iPhone 3G Mania! Everything and Everyone and Everywhere, all they talk about is the new iPhone 3G.

I am really trying to resist the urge. Though my contract is long up, and my Windows Mobile Smartphone, which I really love, is started to act up, I am still trying to fight the temptation. I know I posted about this before, how I don’t really need an iPhone, but I did not know then about the App Store!

As the old saying goes – It’s the Software, silly! What!!! Do I need to recap again how Microsoft made Billions Trillions and virtually created a Monopoly in many markets (not just Operating System), by focusing on Software?

So are they missing the next computing revolution again, just like they almost missed the whole Internet thingy, back on Billy G’s watch? The mobile revolution is just as critical, if not more so!

What’s more, this is a monumental shift away from bulky desktops, to tiny, powerful and mobile devices, which naturally lend themselves to cloud computing. These devices will rapidly become faster internally (CPU), with faster connection speed and more sensors (like GPS, Accelerometer, etc.). Bigger screens, projected screens and virtual input devices, precise speech recognition – such features are a given. But the most exciting are the capabilities that extra sensors bestow on our computing experience. Geo-tagged photos, virtually unlimited world of streaming Video over the air, purchasing items from Vending machines with your device, are just few simple and existing computing experiences right now.

Try to do that with your desktop PC! And therein lies a problem — pretty soon we won’t need the old clunky desktop computers, that used to run Windows (remember that monolith!!?). Already most people rapidly shifting to Laptops, for example.

So where is Microsoft? I am not just concerned as a client and user here, but as a shareholder! Windows Mobile is something I have been using for years, on all kinds of devices, from version 1.0 in fact! And it has rapidly went Nowhere! Here we are in 2008, all we got is barely version 6 and it offers no major features. Where is the long overdue Deepfish browser? Will it support JavaScript or Flash or some fancier features that people need on the mobile platform? Why no Java on Pocket PC editions of Windows Mobile!? That kills thousands of applications that could really enable that bigger touch-screen!!?

It’s the Apps, stupid! Windows Mobile is still way too complex to develop for. There is the need to support virtually any resolution, plus touch or non-touch screens, plus different built-in device capabilities and CPU speeds. Does that sound simple to you!!? Versus, the iPhone Apps — One platform, modern operating system, AND developers have a trusted set of features and capabilities! Plus, their programs go through Apple quality control, before being released to device. That is actually good, IMHO.

So why this post, why the blues? Because It’s the Echo-system!!! I will be the last to accept iTunes, in fact I don’t allow it on any of our computers here at home, but given the iPhone, it will have to “sneak-in”. This is just a stepping stone, I already see myself buying our first ever Mac down the line, perhaps to develop iPhone Apps. And I HATE Mac OS X !!! Starting with the insulting single button mouse, all the way to supposed “simply works” moniken, which simply isn’t true!

Here I am, torn between the “need” to enter the Cloud Computing age, and the resistance to enter the whole new Apple echo-system, via the iPhone 3G? I am not really viewing it as a Music Player, nor a Video Player, and not even a Phone! I mean gosh, every $0 phone can do these things today!

It’s the REAL BROWSER and the Application Platform, and of course the big screen, these are the exciting things! So friends, family, readers, and just Apple haters, join in and Save Me by commenting below.

Better yet, Microsofties, come and comment and tell me why are you missing the party! Help save me and perhaps thousands others from switching over to the “other-side”. Please, only something that really coming, and no insulting references to limited devices. I have looked at technologically impressive Samsung Omnia, but no USA carrier picked it up, nor there is any serious Browsing or Java features promised! And where is the amazing Android mobile OS from Google? It is also promising, but a huge challenge. Thus far I hear more delays are on the way, not good… Heck, even the mythical Zune Phone (Yea, I know it’s coming, no secrets from me!), with gaming, video and audio, is still unconvincing! Why? Because they will “forget” the Real Browser, and Apps platform, especially if they rush it out in less than a year…

If there is no voice dialing then I can’t see the sense in getting the iPhone. Maybe I’ll be interested after software release 2.1 or whatever is next.

Good try, but like you said, it may just be a simple future software update. Plus, I got voice dialing now on my phone, and I think I used it 2 times in the last 2 years, and it probably took longer to set it up and teach the phone voice labels, etc.

The line outside the store does not mean that inside you will find your deired 3G phone, do not compromise (although it is late), wait !!!

Few remarks…
I am not sure regarding your SmartPhone, but I do have Java platform on my PDA phone, running WM6.1. It is still limited, comparing to desktop, but it manages to run few things I need.Now, the media issue… You will have to upload all the content using iTunes.In addition, DivX content is not natively supported by iPhone, you will have to convert everything to MP4, and then upload to the phone, again, using iTunes.And the “best” part,that is actually correct regarding first iPhone (do you recall that I sold my iPhone after 2 weeks?), you will be able to sync your iPhone to 1 desktop.What I mean by that, is that if, for example, you have uploaded some media at home, and then connect your iPhone to work’s desktop, in order to down/upload the media, iTune’s “best offer” is to delete all currently existing media from iPhone, and then upload the media you have at work. Here is the place to give some credit to Microsoft’s ActiveSync, that has “Guest membership” which does not limit you in any way, and you can install apps, copy data in any direction. You have great media players for WM based devices, and they play DivX.Some also manage to play Flash content,iPhone only plays youtube’s clips,using special software. In most cases you have SD expansion slot, and not limited to 8/16 GBs of storage.Outlook Calendar and Contacts sync natively with your Desktop.You have a lot of GPS software developed for WM, iPhone still lacks that.You will probably mention Google maps regarding that, but lets face the truth, Google maps is not the same as dedicated GPS software,which has great maps and doesn’t require you to use the 3G data network, and will work in Israel, for instance. So, there are still negative issues, but for $200 I would buy it myself :-), just because I love gadgets, not because I like iPhone 2.

You raise excellent points, especially with iTunes limitations. I am sure iTunes will be annoyance, but I hope it can convert some media to MP4 format itself, but even if not, I have plenty of software to do that.
I did not really plan to have too many media files, or even music files, on iPhone, I am mostly looking at it as cloud computing type device, to connect me with all the web sites I visit often, like Google Reader, facebook and many others. Evernote.com site is also very promising, where it auto-uploads and OCRs images that you take of notes/things to remember.
There are tons of games also available already for iPhone and more are coming, with full 3D, which is very promising as well.
Also, I am seeing more and more sites coming out with iPhone optimized version, some put out dedicated iPhone software, and even sites that aren’t optimized for iPhone are readable, which is impressive.
Btw, On your WM 6.1 device, are you able to fully view HTML based emails properly, with images and everything?